In recent days, President Donald Trump has aimed his ire at the nation’s legal system. He has repeatedly attacked the forewoman of a jury that rendered a verdict against a longtime associate (Roger Stone); railed at a Democratic critic (House Intelligence Committee Chairman Adam Schiff), goading his surrogates into demanding a federal investigation into Schiff; and urged two liberal Supreme Court justices (Ruth Bader Ginsburg and Sonia Sotomayor) to recuse themselves from cases involving him and his administration.

And, oh yes, in the midst of all this, Trump anointed himself the nation’s “chief law enforcement officer,” a title that the Constitution does not confer on him and which undermines the important tenet that law enforcement be insulated from politics.

And what has the person generally called the chief law enforcement officer — Attorney General William Barr — done about this? Well, a couple of weeks ago, Barr called on Trump to stop tweeting about pending cases. But since then, as Trump responded to this mild rebuke by defiantly ramping up his attacks, Barr has been mum.

When Barr was nominated, we were encouraged that he would add gravitas and stability to one of the most important posts in government. He had served in the administrations of Presidents Ronald Reagan and George H.W. Bush and seemed far better qualified than Matthew Whitaker, who was occupying the job on an interim basis after Jeff Sessions was pushed out.

At Barr’s Senate confirmation hearing, he pledged “to provide the leadership necessary to protect the independence of this department.”

Barr has not lived up to that promise. In some respects, he has been more destructive than his predecessors: His pedigree has given him cover as he shreds the rule of law and promotes overly expansive views about executive power.

During his year on the job, the attorney general:

— Put a pro-Trump spin on the Mueller report, rushing to clear the president of attempting to obstruct justice despite substantial evidence to the contrary.

— Oversaw a department that took a nothing-to-see-here attitude toward a whistleblower’s complaint about Trump’s effort to shake down Ukraine’s government for dirt on a political rival.

— Reversed the decision of career prosecutors who were seeking a harsh sentence for Stone, a Trump confidante convicted of lying to Congress, witness tampering and obstruction. Four prosecutors quit the case, and one left the Justice Department altogether.

— Reopened the case of former national security adviser Michael Flynn, undermining the work of career prosecutors. Flynn pleaded guilty to lying to the FBI in 2017 but later — at a time when Trump was pressing the Justice Department to be nice to his friends and harsh on his foes — asked to withdraw his plea.

Before Barr, there had been some highly suspect actions taken by Justice, including a meritless lawsuit brought against the merger of AT&T and Time Warner that appeared to be based on Trump’s antipathy toward Time Warner’s CNN unit.

But the political interference has ramped up under Barr’s tenure. His actions have shocked former Justice employees (more than 2,600 of whom signed a letter calling on Barr to resign after his intervention in the Stone case) and prompted alarm among federal judges.

Barr said this month that Trump’s tweets and other comments are making it impossible for him to do his job. But does the attorney general see that job as doing impartial justice or the president’s bidding? Barr’s effort to straddle that line is growing increasingly untenable.

Sign up for daily e-mail
Wake up to the day’s top news, delivered to your inbox

The FBI nabs four extremists for threatening journalists in Texas and other states
Friday February 28th, 2020 at 6:42 AM

In sifting signs of the times, one came through the other day like an alarm bell, the sort of horror that tells us just how dangerous things are becoming and how all people committed to a civil and just society must push back against the creeping darkness.

FBI agents arrested four suspects from four different states as part of a conspiracy “to threaten and intimidate journalists and activists,” according to the Justice Department.

We live in a time when information, even the most basic facts, are in constant question. False information spreads like wildfire while the truth struggles to catch up.

Journalists who are tasked with sorting fact from fiction have too often become the first target of those who would obscure and even seek to destroy truth in the name of furthering their own will to power.

In this charged and dangerous environment, amplified in the poisonous echo chamber of social media, can anyone be surprised that extremists like those arrested this week single out journalists for attack and worse yet mix and mingle racism and anti-Semitism with their attack on the freedoms of press and speech?

In such a time, it is particularly dangerous to see the working press so persistently singled out for ridicule and diminishment.

These arrests are another opportunity for President Donald Trump to put aside his attacks on the free press and to support the work of journalists — even those whose reporting he disagrees with.

It is one thing to disagree. But planting the label fake news on basic reporting — something the president did 273 times last year — and standing by while supporters at rallies harangue and curse members of the press is not acceptable.

It’s important to note that it is the Justice Department, under Trump, that is bringing the case against these alleged extremists — Kaleb Cole of Montgomery in Southeast Texas; Cameron Brandon Shea of Redmond, Wash.; Taylor Ashley Parker-Dipeppe of Spring Hill, Fla.; and Johnny Roman Garza of Queen Creek, Ariz.

Everyone should be grateful for that.

But more should be done. Ideas shouldn’t be shouted down on campus just because they offer an opposing view. Free speech shouldn’t be squelched because it doesn’t fit an approved narrative. And leaders — starting with the president — should denounce efforts to undermine, intimidate and harm the press.

The founders understood just how critical a free and robust press is to the function of a democracy. But they didn’t love it, either.

George Washington, of all people, was the subject of brutal press coverage — much of it unfair and false in a way that wouldn’t stand up to modern standards of responsible news organizations. Even the great pamphleteer, Thomas Paine, turned on Washington in bitter response to Washington’s decision not to help free Paine from a French prison.

“Monopolies of every kind marked your administration almost in the moment of its commencement. The lands obtained by the revolution were lavished upon partisans; the interests of the disbanded soldier was sold to the speculator; injustice was acted under the pretence of faith; and the chief of the army became the patron of the fraud," Paine wrote.

Washington endured it all, knowing that a free Republic must have a free press.

Extremists would like to silence the American conversation. They would prefer a darkness where the only sounds were their own messages of hate and division and even violence.

Arresting and prosecuting people who would use violence to dominate our debates is essential to ensure the rule of law and the right to free expression. It’s the right step for the Justice Department to take.

If it was accompanied by support from the bully pulpit, it would be all the more effective.

8:48 PM 2/27/2020 - Stolen hearse with a casket and woman's body inside is found! Mazel Tov! My humble attempt at interpretation: the alliance between the Israeli and the Russian Intelligence Services.
Thursday February 27th, 2020 at 9:13 PM 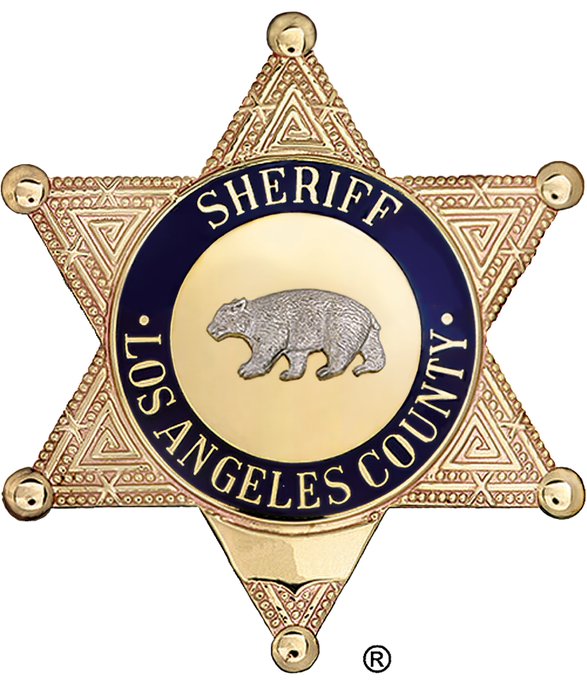 
This does look like Magendovid - the Hebrew Star of David with the shrewd and predatory looking Russian Bear inside, and the circled R sign on a side: "Registered", the Trademark.

I think, that this picture might be the point of the message and the explanation, in my humble attempt at interpretation: the alliance between the Israeli and the Russian Intelligence Services, who are the inheritors, the descendants, the Necrophiliac Lovers, and the abductors - hijackers of the dead woman - the German Abwehr.

If you opt out we will not be able to offer you personalised ads and will not hand over your personal information to any third parties. Additionally, you may contact our legal department for further clarification about your rights as a California consumer by using this Exercise My Rights link. If you have enabled privacy controls on your browser (such as a plugin), we have to take that as a valid request to opt-out. Therefore we would not be able to track your activity through the web. This may affect our ability to personalize ads according to your preferences.

If you would like to submit an opt out of sale request for, please use the following link:

Do Not Sell My Personal Information
Read the whole story

Stolen hearse with a casket and woman's body inside is found
Thursday February 27th, 2020 at 8:11 PM

By Emily Crane For Dailymail.com

A stolen hearse with a casket and a woman's body inside has been recovered after the driver crashed the vehicle during a police chase on a Los Angeles freeway.

The casket was found still inside the hearse after the crash on the 110 Freeway on Thursday morning.

Authorities confirmed that the black Lincoln navigator that crashed was the same vehicle that had been stolen from outside St. Anthony Greek Orthodox Church in East Pasadena on Wednesday night.

Police said they had taken the driver into custody. 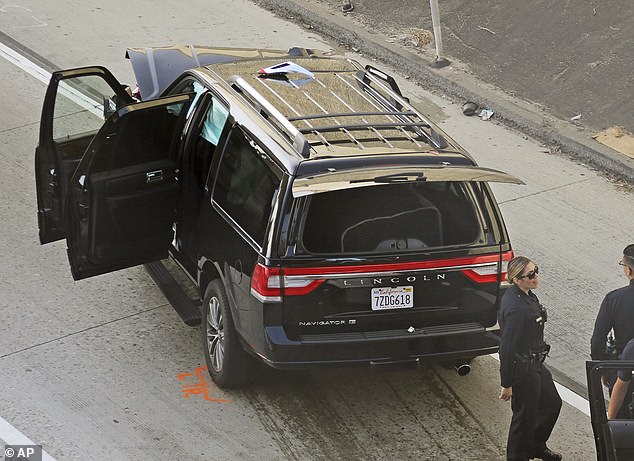 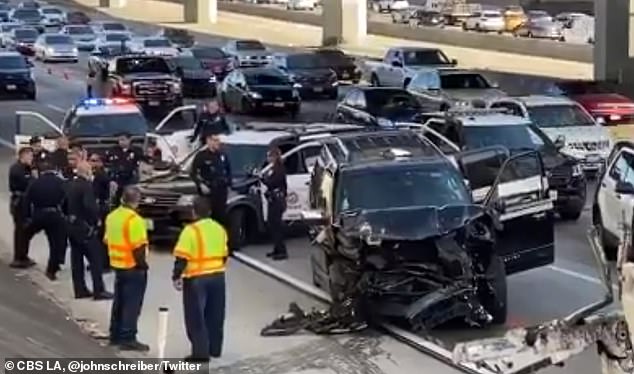 Cops recover stolen hearse with body inside after crash

Los Angeles County Sheriff's Sgt. Benjamin Grubb told KTLA that a member of the public had reported seeing the SUV on the highway.

The Los Angeles Police Department was pursuing the vehicle when it crashed.

Grubb said the body did not appear to have been disturbed but it was unfortunate that the family of the dead person had 'to be put through further trauma'.

The hearse was stolen from outside the church while one of two bodies was being unloaded a night earlier.

The hearse belonged to a mortuary that had been contracted to transport two bodies to the church.

A mortuary attendant had taken one of the caskets into the church while the other was left in the vehicle outside.

Police said they had taken the driver into custody following the crash. Photo courtesy of CBS LA

The casket was found still inside the hearse after the crash on the 110 Freeway on Thursday morning.

Authorities confirmed that the black Lincoln navigator that crashed was the same vehicle that had been stolen from outside St. Anthony Greek Orthodox Church in East Pasadena on Wednesday night

Police said the hearse had been stolen by the time the worker came back out.

The sheriff's department had appealed to the thief on social media on Wednesday to return the body.

'Out of all the bad decisions you have made, at least make one good one and bring back the deceased person and casket inside the Navigator,' it tweeted.

The sheriff's office later tweeted their thanks to the person who reported seeing the stolen hearse.

'Huge THANK YOU to the good samaritan that called law enforcement when they saw the stolen vehicle,' they tweeted.

'We also want to send condolences to the family members of the deceased person, who had to deal with this tragedy.'